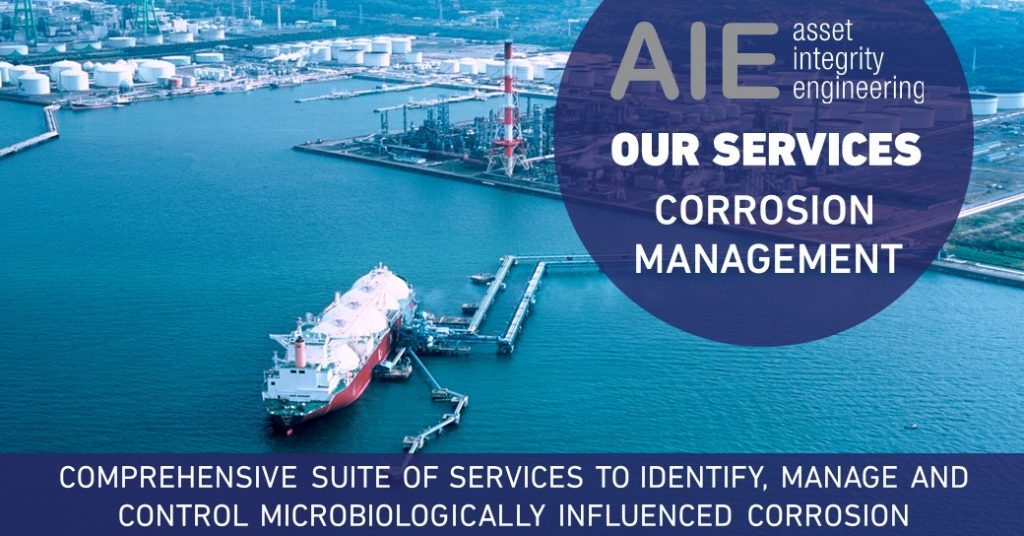 Microbiologically Influenced Corrosion (MIC) is a localized pitting corrosion mechanism that was first identified within the Oil and Gas industry in the early 20th century but is still not fully understood.

MIC can not only cause rapid corrosion but also cause operational issues, decrease equipment life and devalue production fluids. It occurs throughout production facilities but most commonly water injection systems, closed drain systems, re-injection wells and produced water systems as well as pipelines and storage tanks. As a consequence, frequent repairs or replacement and associated downtime occur as MIC can cause pinhole leaks in a relatively short period of time in comparison to other corrosion mechanisms. Corrosion rates of 2-3 mm per year are not unusual but there have been published cases of corrosion at significantly higher rates. In addition, to the operational challenges posed by MIC, there is also the issue of hydrogen sulfide gas, a by-product of the process in many cases, which is not only poisonous and flammable but can also affect the value of the inventory and create additional integrity threats.

Oilfield bacteria come in different forms and types. Identifying each type of bacteria present in a system is a complex process, with no single analysis technique able to verify the differing families of bacteria present due to the differing conditions they can exist. Bacteria are commonly split into aerobic or anaerobic bacteria, and this article focuses on the bacteria commonly found in the Oil and Gas industry. Different forms of bacteria can be present in a processing system, depending on factors such as temperature, pressure, oxygen levels, nutrients, pH and salinity.

Sulfate Reducing Bacteria (SRB) are the most common and problematic type of bacteria in oil and gas systems. They are typically found in pipelines, dead legs on small bore pipework or stagnant flow areas, ratholes and under deposits of scale and other accumulated debris. They metabolize sulfate to sulfide through anaerobic respiration. SRB can remove molecular hydrogen from the surface of metallic materials, leading to cathodic depolarization of the metal surface. Iron sulfide or scale is accumulated on these surfaces, which accelerates the dissolution of the iron. The sulfide ions that are produced react with dissolved iron to produce iron sulfide (black deposits) and/or hydrogen sulfide. Hydrogen sulfide gas is a waste product of the sulfate reducing bacteria; its rotten egg odor is often a marker for the presence of sulfate reducing bacteria. 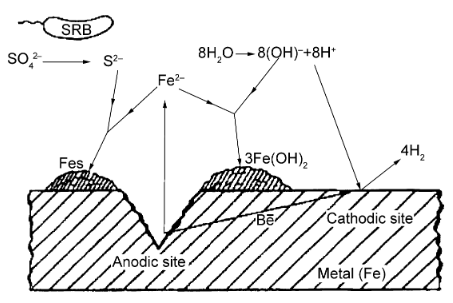 Most sulfate reducing bacteria can also reduce other oxidized inorganic sulfur compounds, such as sulfite, thiosulfate, or elemental sulfur. In addition to the associated corrosion, there can also be significant biofouling by the accumulation of biomass which has caused numerous wells to become plugged by heavy bacterial growth over the years.

Other forms of bacteria include acid producing bacteria (ACB) which are commonly found in storage tanks and platform legs. They produce organic and inorganic acid in the absence of sulfates and nitrates. The acids produced are trapped under the biofilm where they deteriorate the oxide film from the surface of a variety of metals resulting in very high pitting rates, with 10 mm per year not uncommon.

The impact of bacteria can be controlled and monitored if adequate sampling, identification, monitoring, and chemical management is employed. The most common control is by the use of periodic biociding, and in the case of pipelines, mechanical cleaning pigs.

Cleaning pigs in the form of either brushes and scrapers can be an effective means of removing sessile bacteria attached to the surface and any biomass associated with it, along with any stagnant areas of water. It is important to note that mechanical cleaning is not a method in itself to control microbial growth or MIC but if utilized with an effective biocide treatment can substantially reduce the risk and instances of MIC, as well as any measure that removes the source of nutrients such as periodic flushing, in the case of pipework.

AIE offers a comprehensive suite of chemical and corrosion management services to identify, manage and control MIC in systems typically susceptible in the Oil & Gas, chemical, water and wastewater industries.

Our chemical and corrosion management consultancy services are tailored to establish a comprehensive understanding of the nature and type of bacteria in a susceptible system while ensuring the appropriate monitoring and mitigation activities are established. This can include activities such as biocide evaluation, H2S monitoring and trending, MPN analysis to more advanced techniques such as qPCR & ATP analysis, all with specific targets to ensure a full understanding of the level of control and risk in the system. AIE has a strong engineering background in this area and can assist in not only identifying the issues but can arrange and manage third party laboratories and sampling teams to ensure the most effective treatment is identified and implemented.

If you would like to further understand how our chemical and corrosion management team can manage, control and mitigate the corrosion threats in your system, please visit our contact us page.