AIE has recently completed a comprehensive evaluation of water chemistry analysis on a number of producing oil wells at the request of our client’s subsurface team. This analysis is expected to eventually aid in formulating decisions about future drilling locations by avoiding locations at higher risk of water intrusion.

The client’s subsurface team reported that a number of wells in their producing field were suspected to have been contaminated by an external aquifer (i.e. waters other than those that are naturally within the producing reservoir). The oil reservoir was previously isolated from the external water aquifer via a fault seal. However, it was later identified that there are weak points in the fault seal possibly serving as entry points that could allow for water seepage from the external aquifer source into the oil reservoir.

AIE was requested to suggest a methodology for the identification of the difference in hydrochemistry between selected wells to identify the contaminated wells. Eventually, this study will aid the reservoir team in identifying plausible fault seal weakening locations and water entry points. Any ingress networks identified in this process will be coded as pathways that should be avoided for placement of future production wells.

To identify which wells have been contaminated by the aquifer, three alternatives were investigated:

Injecting tracers into the contaminating source did not prove to be cost effective and this approach was therefore disregarded. Moreover, a base uncontaminated sample could not be attained. Consequently, it was concluded that a water chemistry comparison between different wells would be implemented where wells with similar hydrochemistry could be clustered into homogeneous groups.

A set of parameters to aid in the hydrochemistry differentiation were identified and the testing scope was consequently developed and managed by AIE. The parameters included:

Considering that any contamination due to inappropriate sampling or inaccurate preservation techniques could lead to unrepresentative results, AIE prepared a site-specific water sampling and preservation procedure which detailed the required consumables to be utilized by the site team while conducting wellhead water sampling.

Ten producing wells and one water well were selected for the study.

A comprehensive literature review was conducted by AIE’s Chemistry Specialist, and different graphical and statistical methods for water chemistry comparison were identified. The Hill-Piper and Schoeller diagrams were identified to be the most suitable for this analysis along with a statistical technique called Hierarchical Cluster Analysis (HCA).

These methods were then utilized to generate the following Hill-Piper and Schoeller plots and HCA dendrogram. 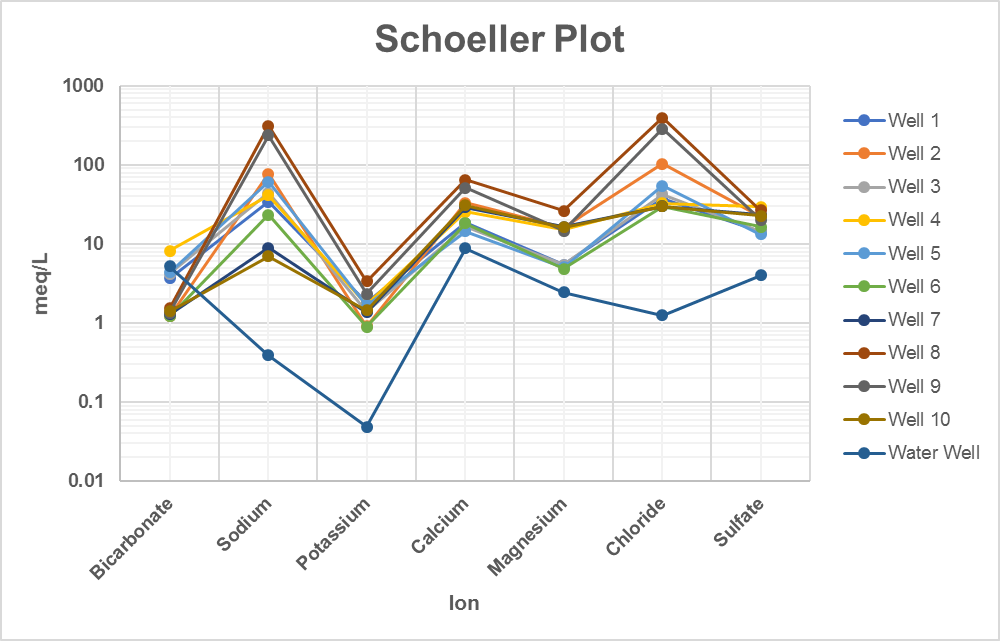 The Hill Piper Diagram and Schoeller plot, indicate water samples that have similar hydrochemical properties. These plots used in combination with the HCA dendrogram provided a means to sort wells into similar water chemistry groups. The outcomes of the above graphical and statistical methods were then utilized for drawing conclusions and represented on a field map for visualization of how the hydrochemical groupings link to the geographical locations of the tested wells. The formulated groups were then used by our client’s reservoir team in conjunction with geological data to support hypotheses on water movements within the producing reservoir.

AIE’s ability to design and implement a bespoke analysis program for this complex project was well received by our client. If you require support with similar water chemistry projects for your subsurface reservoir planning and management, please contact our specialists today to see how we can support your requirements.