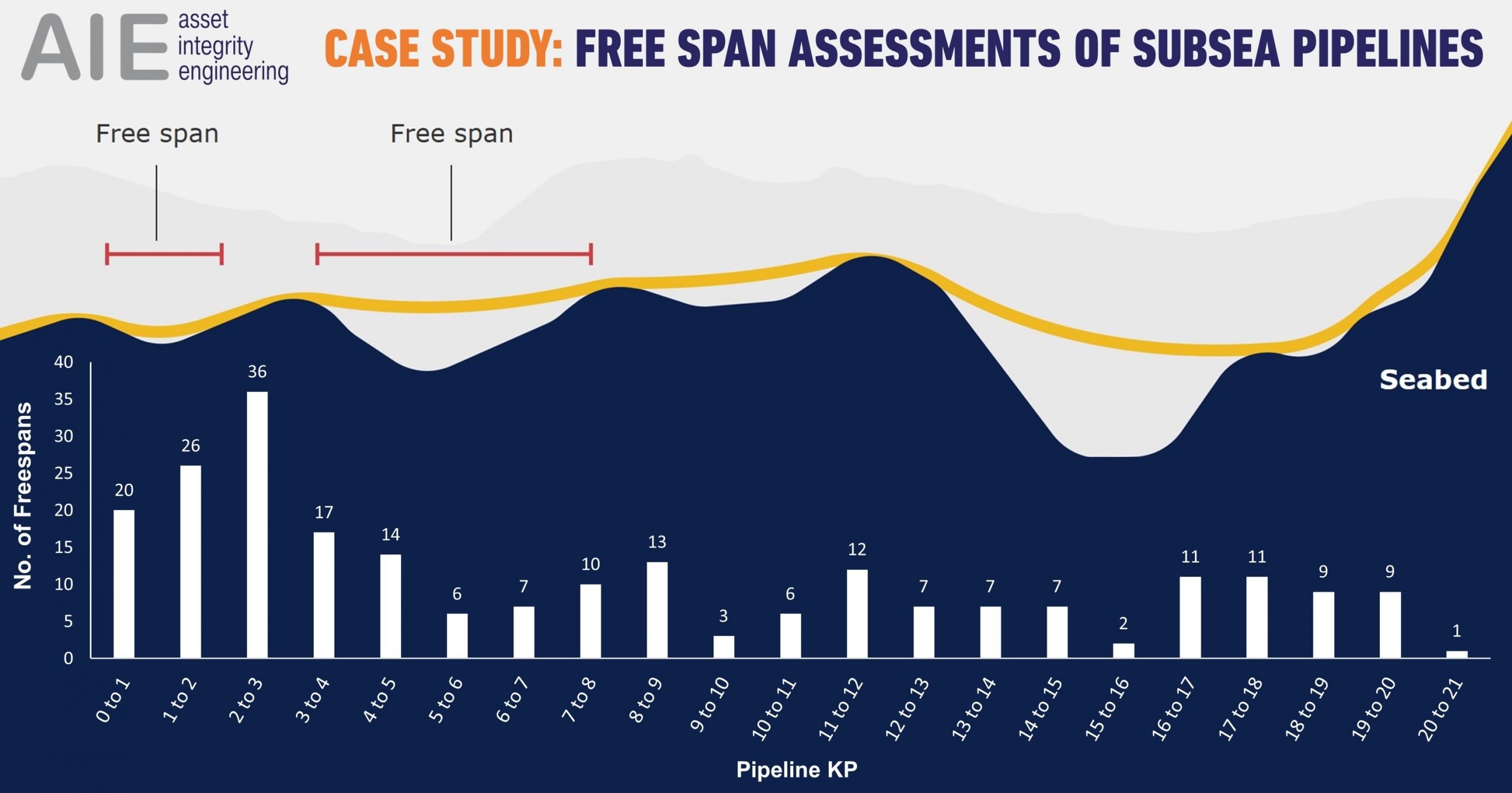 Vortex Induced Vibration (VIV) is known to be one of the major sources of dynamic loads on free spanning pipelines. Due to the flow of wave and current around the free spanning pipeline, vortex shedding is generated; when the vortex shedding coincides with the natural frequency of the span, it causes the pipeline to vibrate, either in-line with the flow (in-line VIV) or in perpendicular motion to the flow (cross-flow VIV). The stress caused by the resulting vibrations combined with the wave loading conditions can lead to a fatigue failure. The span lengths are thus required to be limited to ensure that the natural frequency for the span is greater than that of the vortex shedding. It is vital that accurate analytical approaches are utilized to determine the maximum allowable span length, below which the onset of VIV is prevented, and that regular monitoring is performed to ensure that spans in excess of the allowable limits are identified as well as addressed to ensure that the pipeline is operated within the acceptable risk levels.

AIE have recently performed a detailed Free Span assessment on a pipeline system in accordance with DNV-RP-F105. The assessment was performed on two subsea pipelines, a 18.7 km long 12” Infield pipeline and a 20 km long 12” Export pipeline. After a comprehensive ROV pipeline inspection, the survey showed a large number of free spans for both pipelines.

The Infield pipeline had previously been assessed and a span rectification project was completed based on the original project environmental conditions, however both ROV and diver experiences in the field differed from the reported environmental conditions and a new metocean study was undertaken to confirm the conditions. The new study showed that there was an increase in the seabed currents in the area when compared with the project data, likely to be attributed to the changing shape of the coastline due to coastal construction activities. Based on the revised metocean data, new allowable free span lengths were calculated based on DNV-RP-F105 screening criteria for a range of water depths along the pipeline.

The Export pipeline’s existing allowable free span lengths were based on project documentation and were considered to be overly conservative, resulting in large number of spans not passing the screening criteria. The allowable span length was, therefore, re-calculated by AIE to account for the operating conditions in the pipeline.

Utilizing AIE’s in-house engineering analysis software for free span screening and fatigue assessment based on DNV-RP-F105, the maximum allowable free span lengths for both pipelines were established on the basis of code allowable limits for pipeline stress and screening criteria.

The following code compliance checks were undertaken in accordance with DNV-RP-F105:

After incorporating the latest environmental data, the maximum allowable span limit was calculated for a series of zones along the pipeline route. An allowance was also made for the inspection tolerance in the calculation of the maximum allowable span length. The pipeline zones were selected based on changes in water depth, wall thickness, concrete coating thickness, or any other change in pipeline conditions that would impact the pipeline response.

Once the maximum allowable span length for each zone was calculated, all free spans were identified that exceeded these limits. The following table details the result of the assessment.

Following the screening assessment, AIE recommended that a detailed fatigue analysis for both pipelines be undertaken to further reduce the number of spans requiring rectification. This would reduce the cost of the rectification campaign, as the cost for additional desktop engineering is significantly cheaper than the cost of the rectification of unnecessary spans whilst maintaining the integrity of the pipelines. The client agreed to the recommendation and work commenced to undertake the detailed analysis of the spans.

All spans that exceeded the screening length criteria were subjected to a detailed fatigue assessment accounting for specific conditions (water depth, concrete coating thickness, and temperature) at each location.

The results of the assessment showed a significant decrease in the number of spans requiring rectification. The following table details the results before and after the screening and fatigue analysis.

Through detailed analytical means, AIE was able to significantly reduce the cost of the span rectification campaign without comprising the pipeline integrity and risk associated with the pipelines.

AIE are actively working with a range of major energy providers in the provision of both onshore and offshore pipeline integrity services.

We have a highly skilled workforce which possess the requisite knowledge and experience in this specialized area of operations. Combined with our in-house integrity risk assessment software, Veracity Pipeline, we are equipped to provide a complete service solution to our clients which ensures pipeline integrity management is fully integrated and operationalized into our client’s business.